Cultural policy of governments contributes to the preservation, development and distribution of arts and culture, at both national and international level. The most common means that is used for this is subsidy, but this also includes tax measures and legislation and regulations, such as high and low VAT rates and the Gift and Inheritance Tax Act. In this way, the cultural policy influences both the subsidised and the unsubsidised organisations in various sectors.

All governments formulate their own cultural policy. The central government has formulated the following guiding principles for the period 2021-2024: broadening and renewal, a strong cultural sector, culture for everyone and culture is boundless. In addition, the endorsement of the Fair Practice Code, the Governance Code Culture and the Diversity & Inclusion Code is a subsidy condition.

For the period 2017-2020 these guiding principles applied: quality is paramount, room for innovation, and profiling and cooperation as second nature.

There is more emphasis at provincial and municipal level on the regional and local cultural policy and facilities like cultural education and amateur arts.

Impact of arts and culture

Arts and culture in figures

Politics determines how much government money is made available to fund this policy. This occurs at a central government level, as well as within provinces and municipalities. Governments and funds subsequently ask independent advisers to assess the quality of subsidy applications. They offer advice on awards to specific projects, companies and artists.

Expenditure at a central government level is often extensively discussed in the media. However, relatively few subsidies are granted by the central government, namely just 30% of the total number of subsidies. Municipalities, which fund 60% of all subsidies, are the real financial backers. The provinces have a 10% share. This allocation formula does not apply to all cultural institutions, because the policy per province and municipality differs greatly.

At central government level, a distinction is made between institutions that are part of the cultural basic infrastructure (BIS) and those that are not. The basic infra*structure is directly financed by the Ministry of Education, Culture and Science and includes the cultural funds, sectorial bodies and institutions that are of national importance according to the government. They all receive a four-year subsidy. A large proportion of all cultural institutions receive (additional) subsidies via one of the six government funds, which are included in the basic in*frastructure: Performing Arts Fund NL, Netherlands Film Fund, Cultural Participation Fund, Creative Industries Fund NL, Dutch Founda*tion for Literature and Mondriaan Fund. 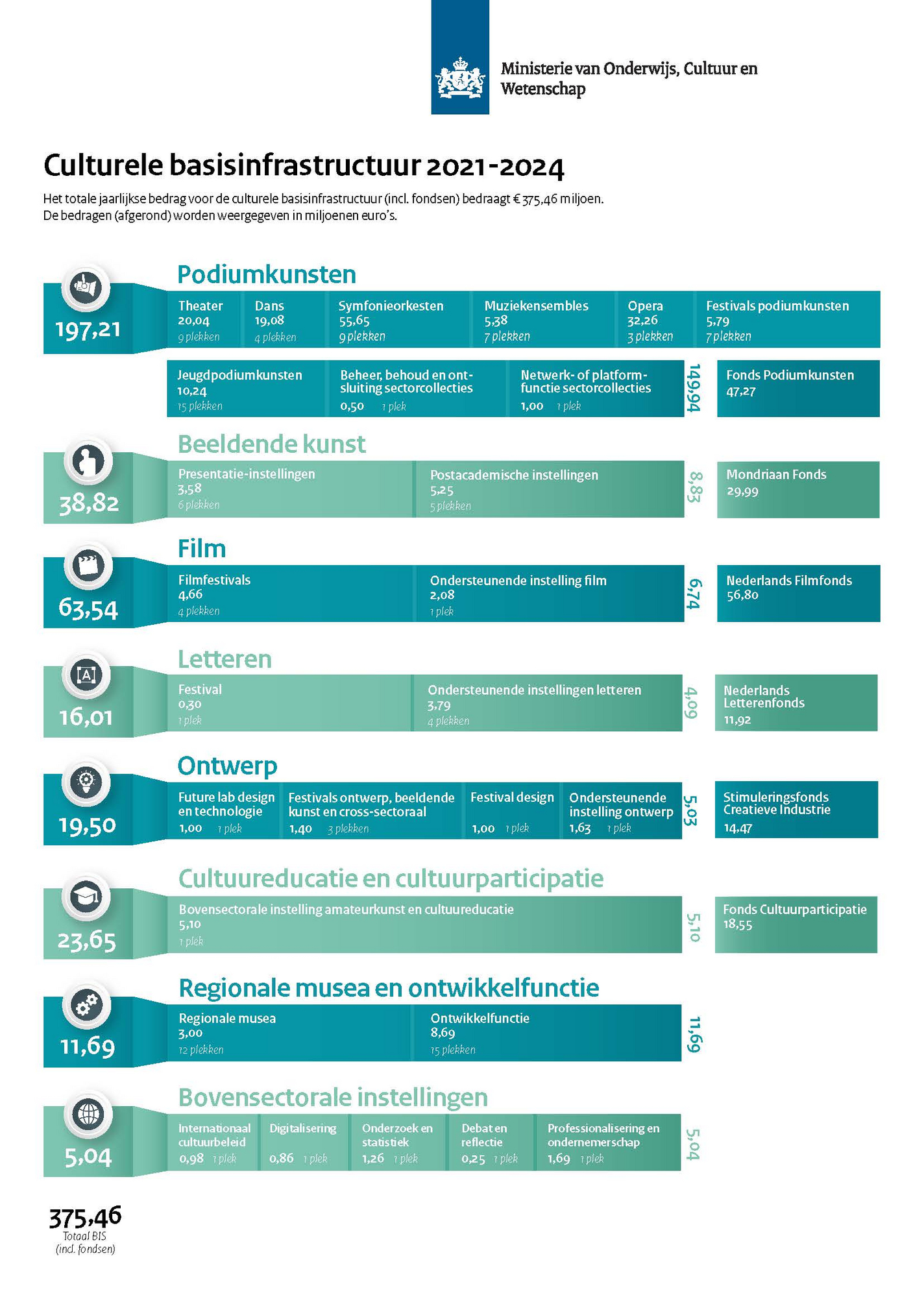 A separate policy for the media (radio and TV broadcasters and internet) has been drawn up by the Ministry of Education, Culture and Science. This media policy ensures that the media in the Netherlands and at European level form a varied range of radio and television stations, that they can work independently and are accessible to everyone.

In addition, the government ensures that the media is used in a responsible manner. The European Audiovisual Media Services Directive (which, among other things, is geared towards enabling free traffic of broadcasting services on the internal market of EU member states) and the Media Act form the basis of the media policy.